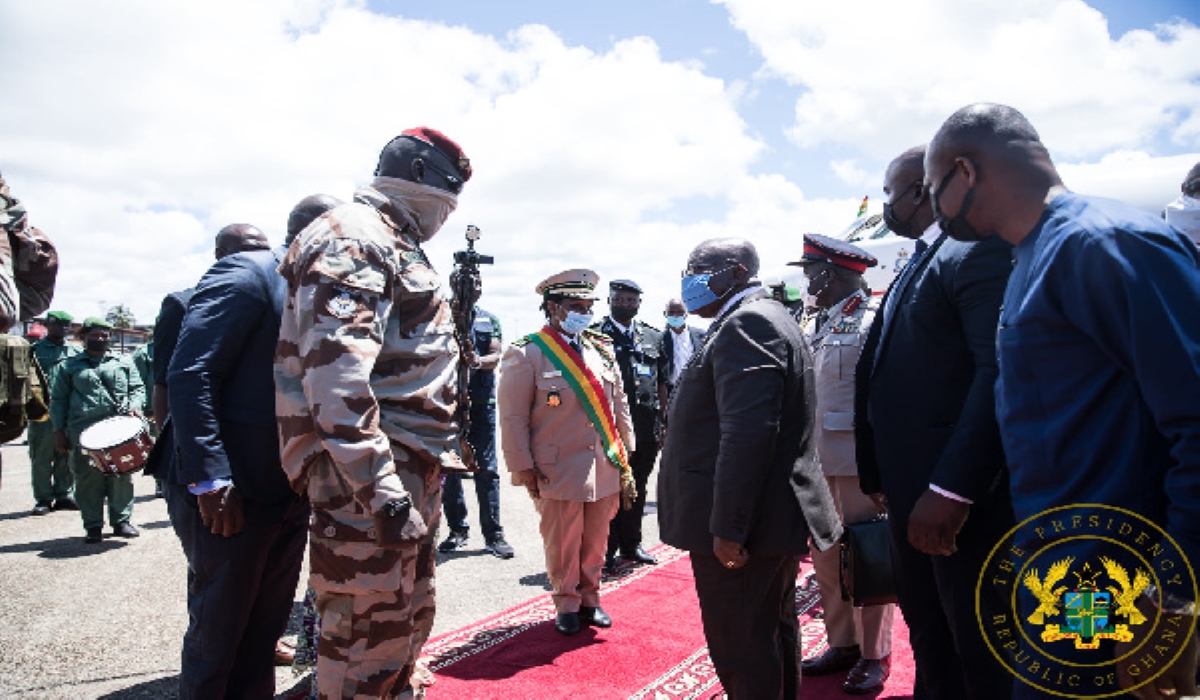 Claim: A Facebook user, Evangelist Adda Emmanuel, has alleged that Akufo-Addo has ordered for the immediate arrest of military men in Guinea because they attempted to assassinate him.

Akufo-Addo has not reported on the arrest of military men in Guinea nor on military men attempting to assassinate him in his address to the UN General Assembly.

In his capacity as the chairperson of the Economic Community of West African States (ECOWAS) Authority, the President of Ghana, Nana Addo Danquah Akufo-Addo went to Guinea on 17 September 2021 to have ECOWAS-delegated discussions with Guinea’s military leadership led by Colonel Mamadi Doumbouya which included the immediate release of President Alpha Conde and for elections to be held within six months.

Following this event, a Facebook user, Evangelist Adda Emmanuel, on 19 September 2021, announced in what he claims to be breaking news that Akufo-Addo has ordered for the immediate arrest of military men in Guinea because they attempted to assassinate him.

On 16 September 2021, a day prior to the ECOWAS delegation to Guinea, the Authority of Heads of States and Governments of ECOWAS chaired by Akufo-Addo, held an “Extraordinary Session” in Accra, Ghana, to review the political developments in the Republic of Guinea. The session’s communique indicated the decisions of the Authority and none included the Chair’s purported order of the arrest of military men in Guinea.

The decisions were  as follows:

Akufo-Addo and the ECOWAS interventions in Guinea

In his address to the United Nations (UN) General Assembly at the 76th Session, on 22 September in New York, Akufo-Addo did not report on any alleged threats of assassination on him while in Guinea to provoke an order from him to arrest any such military men. Rather, he reported that the military leaders communicated a willingness to release Guinea’s President Alpha Conde and he was expecting to hear of that outcome.

“ECOWAS, the regional body whose Authority I have the honour to be the current Chair, is unreservedly committed to maintaining democratic governance in the ECOWAS Community. That is why both Guinea and Mali, foundation members of the Community, have been suspended from its organisation, pending the restoration of democratic governance. We welcome the support of the United Nations for the measures taken. ECOWAS has given Guinea six months to do so, and requested the immediate release of President Alpha Conde. On my visit to Conakry last Friday, the military leaders indicated their willingness to see to his imminent release, and it is our hope that they will keep to their word,” Akufo-Addo said.

Photos of the meeting in Guinea also shared the reception of Akufo-Addo and the delegation by Colonel Mamady Doumbaya, with no reference to any tension between Akufo-Addo and Guinean soldiers.

Additionally, the Guinea Junta’s leadership, who do not appear to be arrested by any higher authority, addressed the media on their response to the ECOWAS decisions on 20 September 2021.

The spokesperson for the Guinea National Rally and Development Committee, Colonel Amara Camara mentioned that:

History of the disinformer

Dubawa observed activities on Evangelist Addai Emmanuel’s Facebook page and noticed the user’s tendency of spreading misinformation concerning Akufo-Addo and the Guinea coup-related events and commenting and jesting on current affairs through video and text posts. The page has a community of followers (128,073 followers and 82,134 likes) who commend the user for his videos, find his video commentaries on issues humorous and that need assistance from him, as he appears to be an influencer of some sort. Meanwhile, the page which was created on 16 April 2012, does not indicate that it is a satirical page. It only states that,

“The purpose of this channel will change in the New year into teaching Mathematics, Science, Technology into creativity to help the Ghanaian People.”

On a similar subject on Akufo-Addo and ECOWAS interventions in Guinea, the user had alleged in an earlier Facebook post that the Guinea coup was fake, was only mind games and advised Akufo-Addo to rather return to Ghana and see to the commissioning of industries.

The photo shows below:

This assertion of the Guinea coup being fake is false as the Guinea Coup was reported on 5 September 2021, and there is evidence of the ousting of President Alpha Conde and the military take over led by Colonel Mamady Doumbouya.