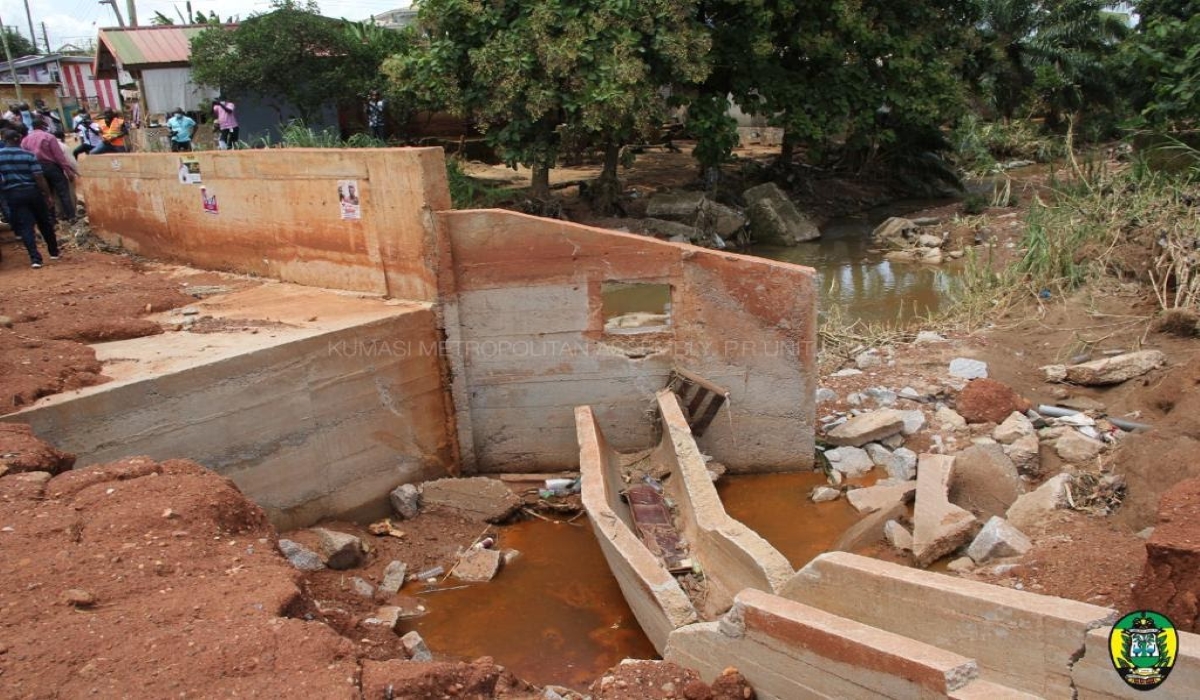 The torrential downpour witnessed in Kumasi and other parts of the Ashanti Region, last Thursday, June 24, 2021, resulted in massive flooding of some areas of the city displacing many residents.

The development, a perennial occurrence, has so far also led to the deaths of a total of six people including an infant, according to the Ashanti Regional office of the National Disaster Management Organisation (NADMO).

The deceased persons include three young girls, according to myjoyonline.com. Two of the girls, who were siblings aged 8 and 2 years, were swept away by floodwaters at Asuoyeboa, a suburb of Kumasi, after River Abonsua, which had overflowed its banks, entered their residence, it was reported.

Meanwhile properties worth millions of Ghana cedis including buildings, roads, market wears, household items were also destroyed due to the heavy rainfall.

Some Key Facts To Note

Duration of the rainfall: 5 hours

Duration of the rainfall: 3 hours 6 minutes

What Caused The Flood?

Data provided by the Ghana Meteorological Service Department in Kumasi shows that the three hours and six minutes downpour measured up to 108.38 millimetres. This amount of rainfall recorded has been described as unprecedented within the last 10 years in the region.

The District Meteorological Officer, Kwame Ofori-Agyemeng, explained that before the widespread flooding on Thursday, a rainfall amount of 55.9 millimetres was recorded the previous day, Wednesday, June 23. This is one of the two key factors that led to the flooding.

According to him, June is the peak of the rainy season and during this time the water table in the earth crust rises due to predominant rains.

As a result of that, any significant amount of rainfall that the earth soaks will be saturated enough for the earth to gradually assimilate or drain before the rain on the surface can settle.

However, it is important to highlight that the amount of rainfall recorded on the day the flooding occurred was very huge, and has not been recorded for the past 15 years according to data available for Kumasi rainfall.

The intensity of the rainfall within that short period of time is quite notable.

“So, from the previous day’s rainfall which shows that  the earth surface had already soaked some significant amount of rainwater, there was a likelihood of flood, as was the case,” said Ofori-Agyemeng.

Ofori-Agyemeng was clear that anthropogenic activities (human activities) further aggravated the flooding. The indiscriminate disposal of refuse, particularly plastics, building in waterways among others affected the ability of the rain water to find its way to join water bodies.

He proposed the construction of storm drains as well as properly structured bridges, where necessary, to significantly address the annual floods witnessed in the country.

The Aftermath of the Flood: Response of government and other agencies

The Deputy Ashanti Regional Deputy Director of NADMO, Ernest Yaw Amoah, disclosed that most parts of the region were affected while attributing one the possible causes of the flooding to building in waterways.

Meanwhile, the Ghana National Fire Service who intervened in several near-fatal situations during the floods have worked to desilt major drainage around the newly developed Kejetia Market which also flooded.

Personnel from the Fire Service with the assistance of some persons removed tree storms from the main drainage system of the market. According to the Daily Graphic, some city authorities pointed to the tree storms as the cause of the flooding of the Kejetia Market.

The Kumasi Metropolitan Assembly (KMA) has, however, said they are waiting for a report from NADMO and the Town and Country Planning Department of the Assembly to inform their next line of action.

The Public Relations Officer of KMA, Henrietta Afia Konadu, however, noted that initial assessment of the flooding situation pointed to human causes. However, she maintained that it will require collaborative work between the affected Metropolitan, Municipal and District Assemblies (MMDA’s) to effectively tackle the annual flooding witnessed in the Region.

KMA fears the current situation is likely to affect revenue collection but the loss could only be realised at the end of the financial year.

The Minister of Works and Housing, Mr Francis Asenso-Boakye, has asked city authorities to pull down over 300 structures which are identified to be on watercourses.

It is believed that this would help avert further flooding in the future, with the onset of the rainy season.

“Mr Asenso-Boakye gave the advice last Monday when he visited some areas in Kumasi that were affected by the heavy rains recorded last week and which left two people dead in the metropolis and rendered many others homeless.”

According to Mr Asenso-Boakye, managing flood was not the responsibility of only the Ministry but also the MMDAs, as well as their chief executives, who had been mandated to manage flood at the local level and help solve the perennial floods across the country.

The researcher produced this article per the Dubawa 2021 Kwame KariKari Fellowship partnership with ThebftOnline Tribune to facilitate the ethos of “truth” in journalism and enhance media literacy in the country.