False: Akufo-Addo’s statement on a presumed “tribal agenda” to disenfranchise people in the far north of Volta was stylized.

Claim: A video on Twitter depicts Akufo-Addo as saying his tribal agenda is to disenfranchise people in the far north of Volta.

False. The video clip was taken out of context to share a false narrative. It is originally a video of Akufo-Addo’s zoom meeting video published in July 2020 where he was heard advising his team to focus on records, competencies, abilities and achievements and outputs and not on gender and tribal agenda.

A Twitter user has shared a video today, which has Akufo-Addo seen stating that “we have some tribal agenda to disenfranchise people in the far north in the Volta’’

The video is accompanied with the message by the Twitter user: “#leaked Today is the day to end this state capture with military intimidation. Time is NOW! #iTrustJM #ElectionDay #ElectionCommandCentre#GhanaDecides #GhElections #4MoreForNana to steal. WASSCE Evans Mensah Waakye #gmabcelectioncamp#ElectionNerveCentre NABCO”.

Dubawa subjected the acclaimed 27 second video on Twitter to analytical scrutiny and found the video to be taken out of context. Results of the video frames examined on Yandex reverse image search revealed that the claimant’s video was taken from President Akufo’s Zoom meeting held with members of his campaign communication team where his comments were stylized and twisted to miscommunicate his true claims. 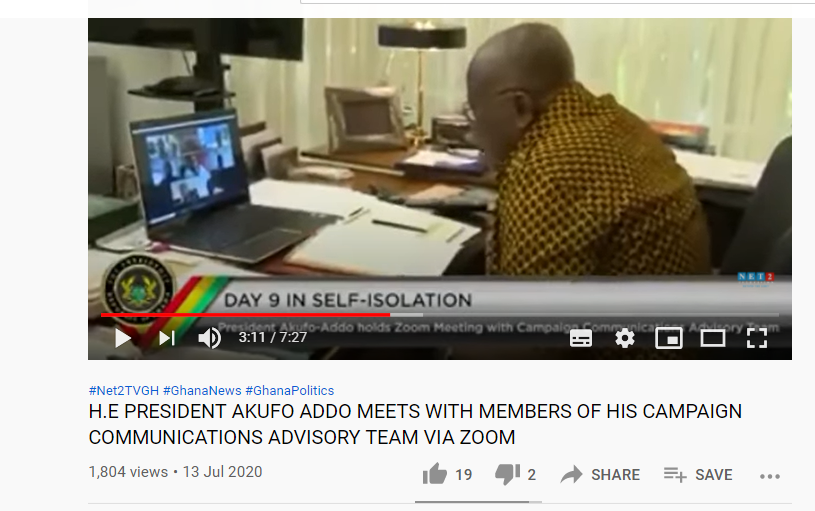 The Zoom meeting took place on 13th July 2020 while Ghana was still under lockdown and the crux of the meeting was to lay a strategic plan towards the December presidential polls in Ghana; alongside  campaign strategy for the NPP and Akufo-Addo. The actual video which was shared on YouTube  on 13 July 2020 by  NET 2 TV, showed Akufo-Addo discussing the need for his communication team to focus on the Unity of Ghana and the achievements of his tenure; and not focus on sentiments such as tribe, religion, and gender as a basis for voting.

It was along the line of this theme that the claimant cut some part of Akufo-Addo’s words to purport the  claim in question.

The actual context of Akufo-Addo statement’s captured reads below:

“whether you are Muslim or Christian I am strongly a Christian and am part of the big Christian majority in Ghana but it shouldn’t be part of our discourse,  and clearly, gender should not be also part of our discourse. We are looking at all kinds of records and competencies. So it should be possible in discussing these statements before the Ghanian people to be a discourse about: competencies, abilities, records, achievements, output. So I think that is something I would like us to stress so much, not some tribal agenda that we want to disenfranchise the people in the far north in the Volta. I don’t understand where that is coming from. It is deliberate and artificial; any candidate of valor knows that it is artificial and it’s being done for a very short time political game. I am not sure if that’s a legitimate way of advancing a political agenda. Certainly, it is not the one that would love to promote”.

Also, it is obvious that the actual video is not a leaked one, contrary to what the claimant cautioned on the short clip to push the narrative. The original video has been made available to the public since July 2020.

The claim that Akufo-Addo is seen and heard stating that ‘’we have some tribal agenda to disenfranchise people in the far north in the Volta’’ is false.

The claimant’s video shared on Twitter was cut from a  zoom meeting Akufo Addo had with his campaign communication team in July 2020, where he was heard advising his team to focus on records, competencies, abilities and achievements and outputs and not on gender and tribal agenda. The claimant stylized Akufo-Addo’s statement in mid-sentence from its actual context to achieve an entirely different narrative.