US presidential candidate, Joe Biden, kneels before Ghanaian actor Don Little or George Floyd’s son in the US

The photo used as the basis for the claim shows someone other than Don Little. It also does not show George Floyd’s son. The little boy is CJ Brown, son of Clement Brown, the owner of Three Thirteen clothing store on Livernois Avenue in the USA.

An image that was widely circulated last year of U.S. President Joe Biden kneeling before a child has been revived. Last year, social media users said the child in the picture was the Ghanaian actor, Don Little. This time, they claim he is George Floyd’s son; President Biden, according to the posts, knelt before Floyd’s son to ask for forgiveness.

Last year, many news portals in Ghana including Kasapafmonline and GhPage published reports that claim that former US vice president; Joe Biden, has been captured in a photo kneeling before Ghanaian actor, Stephen Atanga popularly known as Don Little.

The accompanying photo shows the politician, who was the Democrats’ presidential candidate for the 2020 US elections, down on one knee talking to a little boy.

The reports cite Joe Biden’s Instagram account as a source for the photo which has since been shared many times on social media.

At the time, the actor, Don Little in an interview on Angel FM’s evening news bulletin on Thursday September 17, 2020 also claimed that he was the one in the photo.

He said the then presidential candidate knelt before him after he predicted victory for him.

“I was on my way to the Ghana Embassy in the US and on my way they showed me where they have meetings. I waved at him [Joe Biden] and said ‘hi’ and he called me. I didn’t even know that he was contesting Trump. I prophesied to him that in the upcoming elections, he will win the elections and that if my prophecy fails, he should walk past me if he sees me.

“He was shocked and knelt before me and asked me to repeat what I said. He told one of his people to take a photo of us… It is in Ghana that leaders don’t allow us to get close to them but elsewhere, the leaders are humble,” he told host Kofi Adoma Wanwani [17 mins – 28 mins].

Don Little in a Joy News interview said he started acting in 2011 but could not gain public attention because most of the movies were never released. He said he later started selling airtime in traffic and was noticed by comic actor Funny Face who featured him in his Cow and Chicken series. Don Little became famous from that series owing among other things to his diminutive stature.

The original photo, which was published on Biden’s Instagram page on 15th September 2020 was geotagged Detroit, Michigan.

A reverse image search conducted based on location and date clues directed us to a September 17, 2020 publication by a local newspaper, the Detroit Free Press that showed similar photos like the one used to make the claim.

The photos show different angles of the single-shot shared by the Ghanaian news portals claiming that the boy who was captured was Don Little.

According to the Detroit Free Press publication, the photo was taken on September 9, 2020, at the Three Thirteen clothing store on Livernois Avenue after a campaign event at the UAW Region 1 headquarters in Macomb County.

The report further indicates that the little boy is CJ Brown, son of Clement Brown, the owner of the clothing store.

An assessment of the additional photos shown in the publication provided compelling evidence that it was not Don Little although the two individuals appear to have the same hairstyle and height and are of a similar skin complexion. 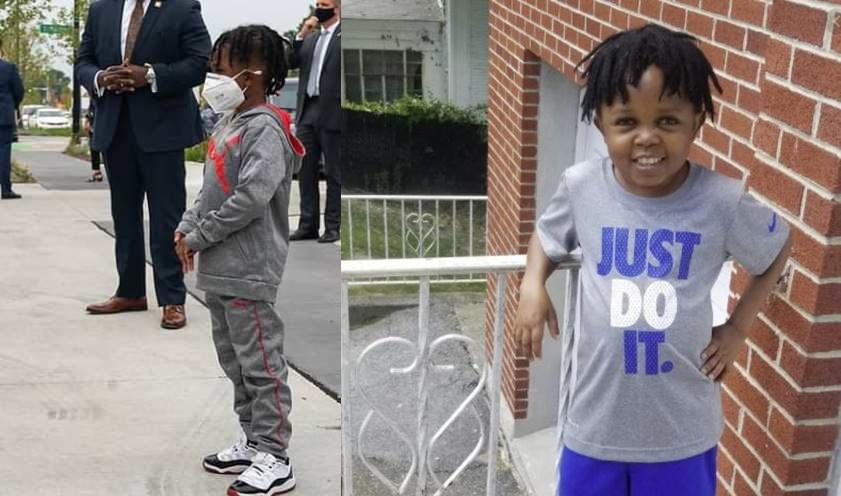 Below are more photos of Joe Biden and the supposed ‘Don Little’ published by the Detroit Free Press and ABC News’ local portal in Detroit.

A news report by Citinewsroom.com published on August 19, 2020, indicated that Ghanaian actor, Don Little returned to Ghana in August 2020 after being held-up in the US due to the COVID-19 pandemic. On August 19, 2020 the actor published a video on his Instagram page in which he expressed appreciation to some state officials for facilitating his return to Ghana.

When we contacted Don Little on phone via his local number on the matter, he said he was at the moment on a movie set in Ghana and will revert at an agreed time to further speak on the matter.

His phone has since gone unanswered.

Based on the evidence above, we rate as false the claim that Don Little was pictured with Biden and that the US presidential candidate had knelt before Ghanaian actor.

The reporter produced this fact-check under the auspices of the Dubawa 2020 Fellowship in partnership with Citinewsroom to facilitate the ethos of “truth” in journalism and to enhance media literacy in the country.

False; this is not wife of Ukrainian Vice-President in war against Russia

False: R Kelly has not been released from prison

Got a claim for us to fact-check?

Is there a claim that you would like us to investigate?

Has a politician, a business or union leader, a health association or environmental group said something that you suspect is untrue or misleading and that should be challenged?

We cannot investigate every claim sent to us, but we will log all the suggestions and appreciate your help, so kindly contact us.