After flagrantly violating Food and Drugs Authority (FDA) guidelines and putting the health of Ghanaian citizens at risk with the sale of toxic, expired products, both consumables and non-consumables, Ghana’s largest wholesaler and distributing company, Fareast Mercantile, is now groping in the dark, looking for the source who leaked the information to DUBAWA.

An employee, a warehouse supervisor, has been forced to resign on suspicion he volunteered information about the conduct of top management members of the company who, according to evidence gathered by DUBAWA, gave direct orders for the sale of expired products including 11-month-old expired Mcvities biscuits. The biscuits, which were in cartons, over 2000 of them, were sold in December ahead of the Christmas celebrations last year. Between January and April 2022, there were multiple sales of expired products including Blue Band margarine, Jacobs Cream Crackers, Mcvities rich tea, hobnobs, Glide mini,  several buckets of milk, cartons of vaseline, a range of Harpic Gel Citrus, a range of Airwick products, and other products from SC Johnson, Unilever, National and Oriental Food Industries etc.

DUBAWA has intercepted a memo issued by the managers of the company to workers, denying the content of the DUBAWA publications and threatening to fish out the source of the leakage rather than mending its ways and putting a stop to its corporate strategy of selling expired products.

The memo dated April 27, 2022, in part read: “FMCL takes these allegations extremely seriously and we have instituted an internal investigation to establish the veracity of these allegations, which we believe to be inaccurate. Our legal team is engaging directly with the publication regarding the ‘facts” and sources of the article.”

Days after publishing this memo, the company went hunting for the source of information to DUBAWA. Convinced about what they claim to be the findings of their own internal investigation, the warehouse supervisor was reported to have been interdicted by the company even though he is said to have categorically denied the allegations against him. According to our sources at the company, the supervisor was later invited by the Manet Police upon a report filed by Fareast Mercantile. It was not clear exactly what charges were levelled against him. What is clear though is that the supervisor has since resigned from the company. According to our sources, he resigned on May 30.

Few days after his resignation, DUBAWA confirmed a sales meeting held at the Fareast Mercantile Head Office by top managers of the company on June 1, 2022.

According to our sources, the meeting was addressed by Raja Mohammed, the General Manager Sales (Non-food), who is also implicated in our investigation as having supervised the sale of the expired products.

In the meeting, Mohammed is reported to have mounted a spirited defence of his integrity before the sales representatives, denying any involvement in the sale of expired products.

However, for the avoidance of doubt, DUBAWA has in its possession a dozen e-mail correspondence in which Mohammed gave orders for the sale of expired products.

This is one of the correspondences between top managers of the company which led to the sale of an expired Glade mini. Aney Mate, Head of Finance, clearly stated in this mail that this product expired in March 22, and yet on March 30, he gave account numbers into which proceeds of the sale of expired products would be paid.

In responding to the mail by Mate, Mohammed fixed the price for the sale of the expired product at 12 cedis per carton. With DUBAWA’s vigilance and support from the Police Criminal Investigation Department, Edward Sarpong, a dealer in expired products at Agbogbloshie, Accra’s Central Business District, was arrested on March 31, for buying this same expired product just around the same quantity. Sarpong confessed to dealing in three months expired products and that he has been doing that for the past eight years, a confession we have on record and will be included in our Consuming Trash full documentary.

To further corroborate Sarpong’s confession of his eight years of experience in dealing in expired stocks, DUBAWA has in its possession multiple Manual Waybills detailing expired products bought by Sarpong over the last five years.   A waybill, according to the Logistics manual of the Redcross, is an “official document that travels with a shipment, (transport) identifies its shipper, transporter and consignee, origin and destination, describes the goods and shows their weight and freight.”

DUBAWA intercepted email conversations that led to the sale of cartons of 11-month-old expired digestive biscuits, hobnobs, and rich tea, the full content of which can be read here.  As can be seen in the following email correspondence, over 2000 cartons of the biscuits were sold on December 8 and December 22, 2021, even though the biscuits had expired in January-February 2021 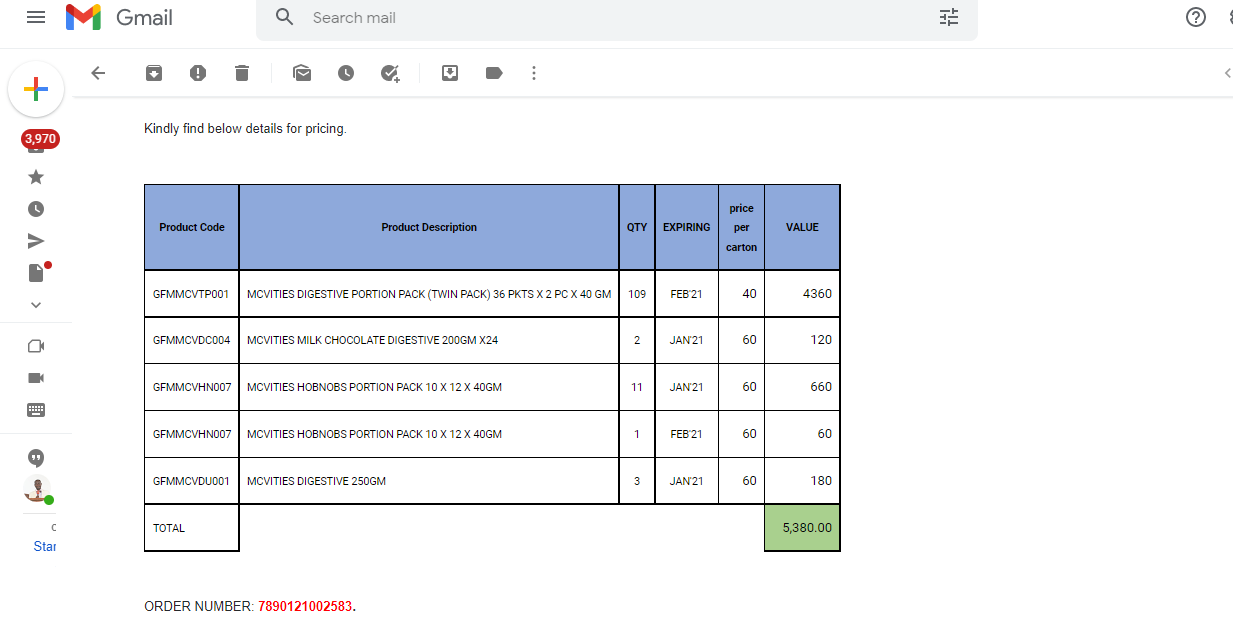 DUBAWA submitted the evidence of the Consuming Trash Investigations to the FDA for appropriate action. We have assurances from top-level management members of the Authority to deal with the matter.

DUBAWA was initially informed that the company was going to be fined but given the weight of evidence provided, the FDA would prosecute the company. According to the FDA, it has sent a docket to the Attorney General’s Department for counsel and prosecution.

However, when DUBAWA checked with the Attorney General, Godfred Dame and her Secretary, they were yet to receive the docket from the FDA.

DUBAWA will follow up on the matter until justice is served.

Misleading! Akufo-Addo did not say he wants to marry a woman from the Volta Region

Got a claim for us to fact-check?

Is there a claim that you would like us to investigate?

Has a politician, a business or union leader, a health association or environmental group said something that you suspect is untrue or misleading and that should be challenged?

We cannot investigate every claim sent to us, but we will log all the suggestions and appreciate your help, so kindly contact us.