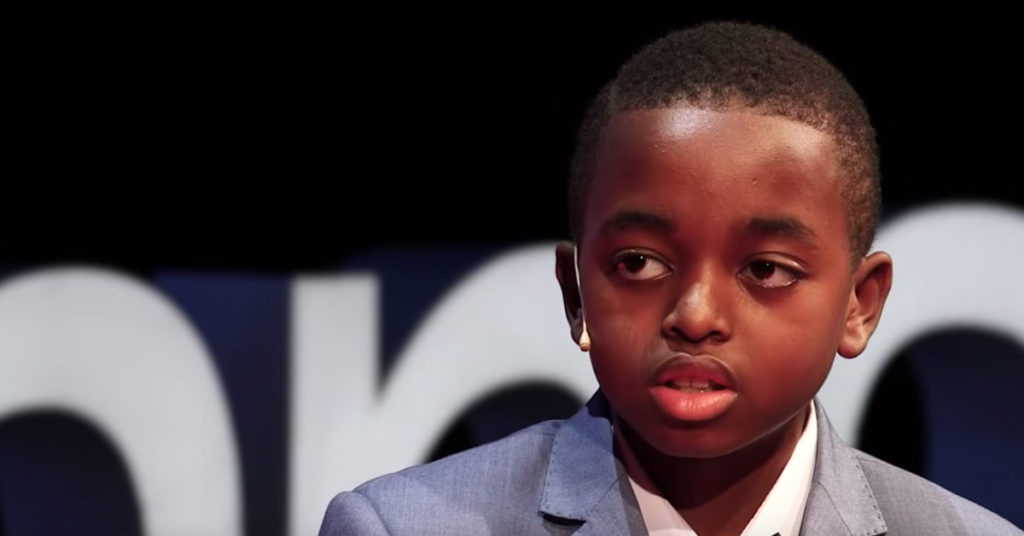 A 6-year-old boy, Joshua Beckford from Tottenham, is the youngest to ever attend Oxford University.

Joshua Beckford has been featured in a number of news reports and has confirmed in interviews, his admission into Oxford University to study Philosophy and History when he was six years old.

A photo, which appears to be retrieved from Snapchat and is asking to be made viral, is purporting that a boy from Tottenham, Joshua Beckford, is the youngest person to ever attend Oxford University to study philosophy at the age of six.

It also alleges that no one knows much about him and he’s never made front-page news.

In a 15-minute YouTube video of an interview with Joshua Beckford published by TedX Talks on 29 November 2016, it was revealed that Beckford, who aspires to be a neuro-surgeon, had completed the University of Oxford where he studied Philosophy and had distinction in his papers.

Beckford also confirmed in a one-minute interview published by Trends and Buzz in 2019 that he was accepted into the University of Oxford at 6 years-old, where he studied for a year. He studied Philosophy and History, he revealed in this interview.

“This Oxford tutor spoke to my Dad, and they said, you know we could sign your child up for this online learning platform to study Philosophy and History. So I studied for a year and I got five distinctions, one in each,” Beckford said.

It was also identified that he is autistic and is an ambassador for autism, serving the community through charity work especially in Africa. In the interview, Beckford stated his love for studying, his preference for interacting with adults for the acquisition of information, his fluency in five languages, and his love for and participation in a number of sports.

Beckford, who read one of his poems on Mother Earth to the audience, is passionate about the planet and shared some ways in which humans can treat the planet better for it to be a safer place to be inhabited.

Joshua Beckford’s age at the time of the interview in 2016 was identified to be 11.

“Joshua Beckford is an 11-year-old boy with Autism. This makes him special because he experiences the world differently. He has a passion for making the world a better place and believes if we don’t save our Planet nothing else that we do is important,’’ it reads.

In a one-minute YouTube video of an interview published by Trends and Buzz on 30 August 2019, Beckford, who at the time was 14 years old, revealed that he was adopted by his father and started learning at 10-months.  Beckford was abandoned 48-hours after his birth in London and was adopted when he was a baby by Knox and his wife.

In the description box of the Trends and Buzz video, Beckford is said to be of Nigerian descent where he had extended some of his charity work.

“14 Year Old Nigerian, Joshua Beckford becomes Youngest Oxford University Student. Nigerian boy, Joshua Beckford becomes the youngest to study in Oxford University at the age of 6 and graduated at the tender age of 14 from the Department of History and Philosophy. Despite being diagnosed with high functioning autism, Beckford was reported to be an early starter. As a 10 months old baby he could read, write and understand the alphabet. At two, he could read fluently and by the time he clocked three, Beckford could speak Japanese…He is one of the world’s smartest human’’, it reads.

Also, a 7-minute YouTube video of an interview covered by TVC News Nigeria, which was published on 16 September 2019, featured Beckford’s father Daniel Knox, who was visiting Nigeria for the first time with Joshua Beckford at the time.

In the interview, Beckford, who was 14 years, stated that he was still discovering himself and where he came from. The news report mentioned that Beckford was abandoned 48-hours after his birth in London, and was adopted when he was a baby by Knox and his wife.

At the time of the interview in September last year, Beckford and his father were in Nigeria to organise a fundraising  for the building of a school in the state of Kaduna for low income earners.

News reports have featured Beckford’s story, and programmes; for example, the National Diversity Awards in the UK has awarded Beckford for his achievements and featured his story of being accepted into the University of Oxford at age 6.

Dubawa has reached out to the University of Oxford to confirm the youngest person ever to be admitted into their University, and is currently awaiting a response.

Based on the evidence gathered from news reports and interviews with Joshua Beckford and his father, the claim that he studied Philosophy at the University of Oxford when he was 6-year-old is true. However, the veracity of the claim of being the youngest ever to gain admission at age six from the University of Oxford is awaiting confirmation, and will be updated when new information is gathered.