Fact-check: True, Federation of Muslim Councils has called for open collation of election results before January 7

Claim: A story published by nationalistgh.com and shared on several WhatsApp platforms claims the Federation of Muslim Councils has called on the Electoral Commission to resolve election disputes through open collation of results.

From the facts provided by the Federation of Muslim Council and the confirmation of the press statement, it’s true that the FMC called for resolution of election disputes through open collation of the results in the Techiman South Constituency.

A screenshot being shared on social media suggests that the Federation of Muslim Councils (FMC) has called for open collation of results of the 2020 elections before January 7, 2021.

The screenshot which comes with the picture of the National Chief Imam, Sheikh Osman Nuhu Sharubutu, has the headline: “Resolve Election disputes through open collation before 7 January – Muslim Councils to Jean Mensah.”

However, a screenshot of the same story is being shared with the word “Fake” embossed across it to counter the story. 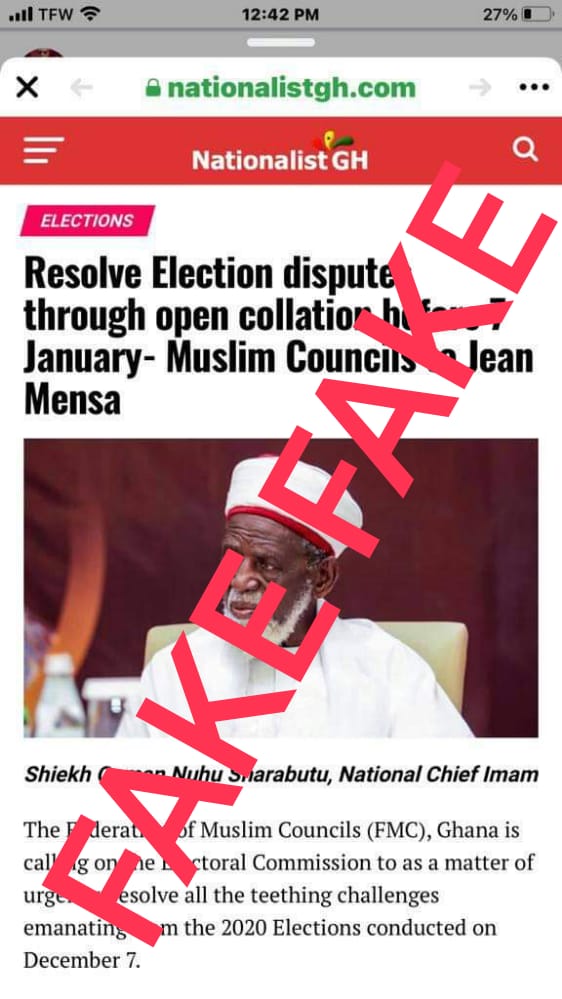 To verify the claim, Dubawa sourced the original story published on nationalistgh.com and republished on ghanapoliticsonline.com.

The writer did the story from a press statement purported to be from FMC.

Dubawa contacted the news portal, nationalistgh.com, which first published the story, and obtained a copy of the press statement to ascertain the veracity or otherwise of the story.

Paragraph four of the statement partly reads: “The FMC therefore calls on the Electoral Commission to accede to the request for an open collation of the results in the Techiman South constituency polls, which has not been done to date in contravention of the electoral rules.”

The statement was signed by the General Secretary of the FMC, Alhaji Muhammad Amir Kpakpo Addo.

Dubawa contacted Alhaji Kpakpo Addo on the phone to verify the authenticity of the press statement.

He confirmed the statement and sent a copy to Dubawa for confirmation.

“That is so. The person took that angle from our release. We asked the EC to heed the calls by the NDC to openly and publicly collate the Techiman South results,” he stated.

Below is the press statement released by the federation:

ACCRA. – The umbrella body of Muslim organisations in Ghana, the Federation of Muslim Councils (FMC) joins other peace loving voices in Ghana, including the National Peace Council, OccupyGhana, Civil Society Organisations in Election Programming and other concerned eminent Ghanaians, particularly the only concerned voice within the Eminent Advisory Committee of EC , Nana Ato Dadzie, c.v, in demanding for a resolution of all lingering electoral disputes in accordance with established laws of the country , before January 7, 2021.

The diverse Muslim communities represented by FMC call on all aggrieved parties to reject violence and seek lawful and peaceful means of resolving all election-related issues. In particular, the FMC is still urging all Muslims, especially the youth, to continue to comport themselves and refrain from any form violence in relation to the just-ended elections.

The FMC, however, joins human rights lovers in strongly condemning the loss of innocent lives through irresponsible acts of the police and the military during the elections, including the outrageous use of brute force by the police on unarmed peaceful Ghanaians exercising their rights to protest. Government is hereby called upon to investigate all shooting incidents, the loss of lives in connection with the elections and punish the perpetrators. The FMC is very worried that a similar call by the National Peace Council for investigation into shooting incidents during the voter’s registration was rebuffed by government, not to talk of government’s silence on recommendations by the Justice Emile Short Commission on the Ayawaso West Wuogon bye-election excesses by a special unit of the Ghana Police Service.

The FMC is comforted by the fact, as pointed out by OccupyGhana in its statement of 23rd December 2020 that, to the extent that the EC is not a law unto itself, “…if the EC is not ready to listen, or wrongly dismisses the challenge, or cannot effect a change because the results have already been gazetted, the Constitution provides the ultimate routes to challenge those results through either the High Court (for parliamentary election) or the Supreme Court (for presidential election.)”

In conclusion, it is important to let justice be done. It is equally important to note that, in as much as Ghana deserves peace and needs peace now, sight should not be lost of the fact that injustice could endanger peace!

Based on the facts provided by the Federation of Muslim Council and the confirmation of the press statement, it’s true that the FMC called for resolution of election disputes through open collation of the results in the Techiman South Constituency.

The reporter produced this fact-check under the auspices of the Dubawa 2020 Fellowship in partnership with The Finder Newspaper to facilitate the ethos of “truth” in journalism and to enhance media literacy in the country.