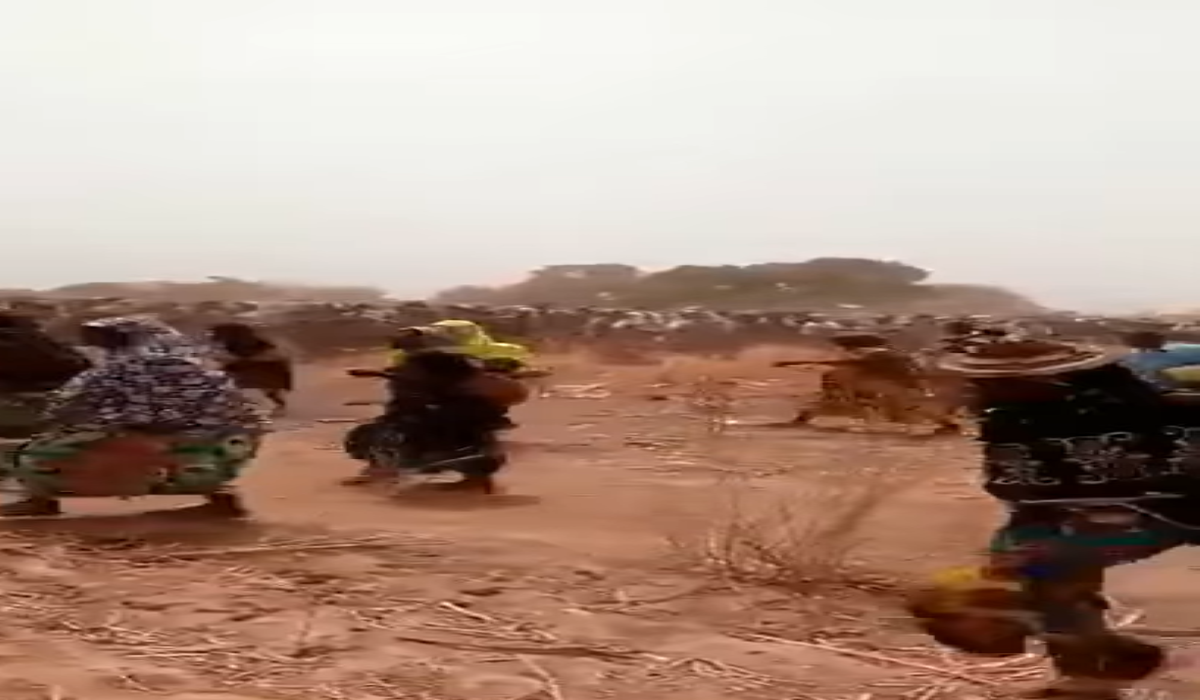 Insufficient evidence to say Burkinabe refugees have been migrating illegally to Ghana. While the Ghana Immigration Service says no mass immigration into the country has been recorded by their outfit, we are unable to independently confirm the origin of the video.

A viral video claims Burkinabees fleeing conflict in their towns are illegally migrating into Ghana. According to some Facebook posters, the people seen in the video are migrating illegally to Ghana.

The video shows tens of people, both women and men including children, appearing to be escaping from a looming danger, in what appears to be an arid environment.

Given the look of the environment, many people have taken to social media to speculate that these are “Burkinabes illegally migrating to Ghana,” one of the posts claimed.

One poster labelled the post as a ‘Security alert!…., suggesting that the presence of the people could somehow be a threat.

The video has surfaced in Nigeria as well with some Facebook users claiming the people were fleeing a volcanic eruption in the Congo while others insist they running from terrorists in Niger.

Several families have fled their homes after attackers killed 138 people in Solhan according to a report by Al Jazeera.

Following the attack, the Prime Minister of Burkina Faso, Christophe Dabire paid a visit to the affected areas.

According to the Head of Public Relations, Ghana Immigration Service Assistant Superintendent, Martin Tioseh Soyeh, no such mass movement of people from Burkina Faso has been recorded by the Service.

In addition to this, he said the Service has not picked up any intelligence regarding these Burkinabes, seen in the viral video on social media, from any of their day and night patrols or from informants along the border communities or townspeople could attempt to enter illegally.

However, he maintained that since those people are alleged to be running away due to the conflict in their village, the Immigration Service will not attempt to stop them should they come across such persons but profile them.

This is meant to ensure that the entry of the people will not disrupt the peace in the country or affect the social or economic wellbeing of Ghanaians. He said these cautionary measures would be taken in collaboration with the Ghana Police Service, National Disaster Management Organisation (NADMO) and the Social Welfare.

The Upper East Regional Police Command also disclosed in the cause of investigating this viral claim that no information to this effect has come to their notice. They maintained that the Command has not gathered any intelligence on this development while suggesting that an alert would have been issued if any possible situation had been sighted.

Based on the evidence gathered so far, it is insufficient to suggest that the Burkinabe refugees were entering any town in Ghana as seen in the video circulating on social media.

The researcher produced this fact-check per the Dubawa 2021 Kwame KariKari Fellowship partnership with Ghana Business News to facilitate the ethos of “truth” in journalism and enhance media literacy in the country.