Does water from Bongo have special sex drive-stimulating properties? 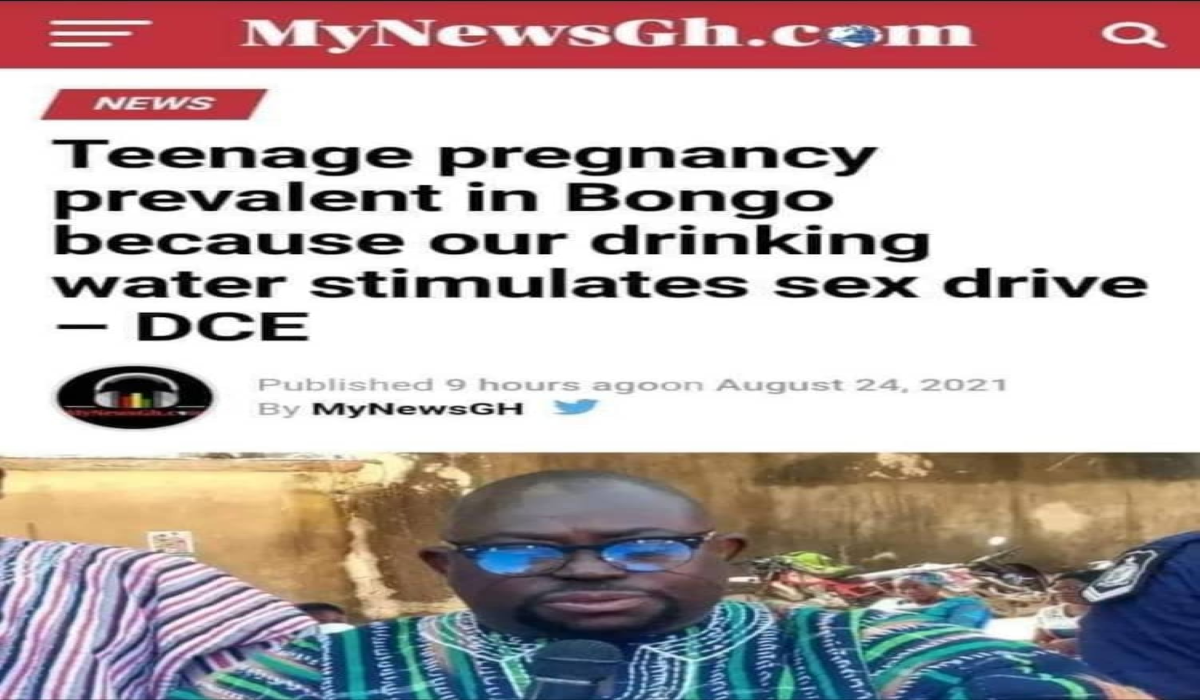 Claim: District Chief Executive of the Bongo District, Peter Ayinbisa, claims the water his constituents drink makes them more fertile and sexually active, a reason for the astronomical surge in teenage pregnancy cases in the area.

False. The water being drunk in Bongo has not been put under any tests to see if it contains any particular aphrodisiac-inducing minerals or chemicals.

It is possibly unlikely for anyone to think that the water they drink can whet or inflame their appetite for sex. However, a story published by myjoyonline.com and mynewsgh.com reports the District Chief Executive of the Bongo District in Ghana’s Upper East Region, Peter Ayinbisa, attributing the high teenage pregnancy rate in the Bongo area to the community’s libido-boosting drinking water. Ayinbisa said his source of information was a nurse whose name he did not disclose.

“The water we drink makes us highly potent and makes us, the men, sexually active,” he is reported to have said.

He added that the water does “wonders” to the men and women in the district, thereby leading to an increase in teenage pregnancies; although he admits he has not independently verified the truth of the matter.

“Somebody told me [the] story that the water we drink makes us [men] sexually active and makes the women highly potent. I don’t know the science of it but a female nurse told me it’s true,” he told Bolgatanga-based Dreamz FM.

The audio, together with the publications, has since received viral and distinct reactions. A Facebook post by this user.

A number of studies have linked the intake of water to the effectiveness of one’s sex life. As the MedicalNewsToday puts it, “a person’s hydration levels can affect their erectile function.” It adds that dehydration can cause poor blood flow in the body, including an improper function of the male reproductive organ.

Similarly, the American Academy of Family Physicians found that depression and anxiety, which are all closely linked to lower water intake, affects sexual performance. A regular intake of about 8 to 12 glasses of water daily is therefore recommended in order to enhance one’s sexual drive and stimulation.

A study published in the British Journal of Nutrition in 2011 also found that young people may suffer from poor sex life due to problems with their cognitive performance and mood, as a result of dehydration.

He said the boreholes, after being drilled, are inspected and tested by the Ghana Water Company Limited (GWCL) to ensure the safety of the water for human consumption and use. The GWCL confirmed this as true.

“They don’t drink water from the taps, they get water from mechanised boreholes. We are trying to connect Bongo to our water distribution system…A new treatment plant has been built in the area and is completed. It will soon be commissioned by President Nana Akufo-Addo,” Stanley Martey, the Communications Director of the Ghana Water Company Limited, told Dubawa.

The GWCL also says it has identified harmful chemicals in the Bongo water. The chemicals negatively affect the growth of people, but do not enhance sex drive or potency as the DCE claimed.

According to Stanley Martey, the Communications Director of the Ghana Water Company Limited, “that’s how come we know [the water] contains fluoride which is not too good for their teeth.”

Fluoride can also affect the bones, and lead to improper functioning of the brain of adults, with children at higher risk, as well as other health problems including skin problems.

“The Community Water and Sanitation Agency (CWSA) has also improvised something that takes the fluoride out but we [GWCL] can’t confirm or deny the DCE’s claim since we don’t have any scientific bases for that,” Martey added.

Mr Martey, however, acknowledged that water, in general, has its own properties and is good for the growth of the human body, yet, cannot single out the sex potency aspect [as is being projected by the DCE].

Are there contrary views?

A Medical Anthropologist and Lecturer at the University of Ghana, Prof. Kojo Sena, has described the claim as unfounded and lacking merit. He indicated that drinking any ‘natural’ water cannot trigger one’s sex drive or potency.

“I read the news on social media yesterday and laughed. Though I’m not a medical doctor, I know there is no connection between water and people’s sex drive,” he said. “If the elders and authorities in Bongo cannot control the menace (teenage pregnancy), they shouldn’t blame it on water.”

A medical doctor who doubles as the Chief Executive Officer of Tantra Community Clinic, Dr Senyo Misroame, has equally underscored that water can only cause a metabolic change in individuals when polluted with chemicals or organic substances.

“Water is supposed to be tasteless, odourless and without any chemical elements. If water is polluted by some chemicals or organic agents, it doesn’t become water in its natural sense; they can cause a metabolic change in bodies,” he told Dubawa.

“You don’t expect water in its natural sense to cause any change in body physiology. It will be difficult for me as a scientist to believe what the [Bongo DCE] said until we put some scientific test into it,” he added.

Meanwhile, the DCE, Peter Ayinbisa, has admitted to Dubawa that he has no research or information to support what he said.

“It is not a fact; a nurse told me. We all know there are obvious causes of teenage pregnancy [but] the kind of water people drink can’t be one,” he said in an interview with Dubawa.

“I was just citing an example to raise the ego [or attention] of our listeners. I never said I had done research or study on it,” he said.

However, he stressed that there is no traditional belief that drinking the water in Bongo leads to pregnancy.

There is no evidence to support the claim that the water being consumed in Bongo is extraordinary in its sexual enhancing and potency enhancing abilities.