Curbing the Spread of Covid-19 misinformation: Trends and Tips for spotting ‘Fake News’. 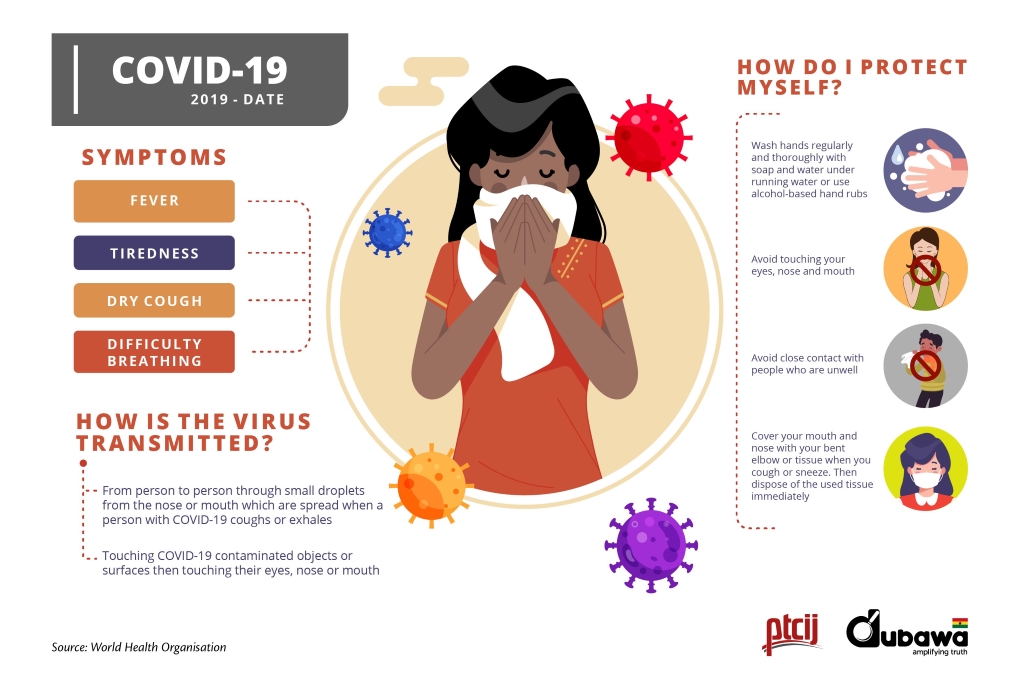 Over the last few months, we have not only had to deal with a pandemic but also with what the World Health Organisation (WHO) calls an ‘infodemic’. Separating truth from falsehood has been a major headache for members of the public.

We wake up to see such messages as “Share this information with your family and loved ones”, “forward to as many people as you can” on many social media platforms.

Since March this year when Ghana registered its index case of COVID-19, the Dubawa team has come across several COVID-19 related messages, especially on social media platforms such as Facebook and WhatsApp.

Our fact-checking of these messages revealed similar results – the messages were either false or taken out of context. In fact, most of the posts flagged to Dubawa by Facebook as part of its Third-Party Partnership, especially on COVID-19 remedies, turned out to be false.

We have also observed that false information flying around at a particular time is determined by current happenings or major events. Therefore, different types of false information surfaced when there was no reported case, no report of any index case, during the lockdown and now as schools have resumed.

For instance, information that circulated when Africa had not reported a case claimed Africans were immune to the virus because of the hot climate. The narrative, however, changed after the continent registered cases.

We have noticed a trend in the kinds of COVID-19 related messages that have circulated on social media since the outbreak of the pandemic in Ghana. We put them into the following categories:

1. Denial of the existence of the disease in Ghana

We found that when the disease started hitting other parts of the world, claims of African immunity and the inability of the virus to thrive on the continent on several social media platforms. Later when cases were registered, viral messages questioned or doubted the existence of the virus on the continent. Even when Ghana’s index cases were reported, old videos of health officials denying the presence of the virus in the country when no case had been recorded, were resurrected to say there was really no case recorded.

While the number of infections rises, purported remedies and cures for the virus also surfaced. This is a major theme that keeps recurring but was more widespread at the beginning of the pandemic in Ghana – as has been the case in other countries.

And they keep resurfacing, sometimes with just a little tweak to them. It is, therefore, not surprising to see a claim which has been debunked in March reappear on social media months later.

The problem with some of these remedies is that people who share them do not necessarily agree on what they are supposed to do. So in one breath, we have seen messages which claim eating a bowl of freshly boiled garlic can cure COVID-19 and others that say it can prevent the contraction of the disease.

This information is not only false but is also very dangerous as we have heard of instances in other parts of the world of people who have died from binging on alcohol after circulation of similar messages in their countries.

About two months ago, Sobolo (hibiscus tea) became very much sought after in parts of Ghana after a viral video claimed it had been used to treat and cure coronavirus in China. And messages to encourage Ghanaians to imitate Chinese by  using sobolo proliferated across the country.

Our verification process showed that none of the supporting documents mentioned by the claimant backed the claim. In fact, one of the documents was about a study conducted in 2016 – when the world did not know about this new strain of coronavirus, COVID-19.

That particular study was about how some selected tea extracts, including hibiscus tea, have shown effects on H5N1 highly pathogenic avian influenza virus (HPAIV).

It is worth mentioning that hibiscus tea, according to research, may be useful in treating viral infections. However, currently, there is no evidence it has been used to cure or can cure COVID-19.

Other remedies which have been popular on social media as preventive and curative remedies include the use of Dettol disinfectant, eating alkaline food or fruits, steam bathing (apun), inhalation of steam, eating ginger, lemon, gargling with saline solution, drinking lots of water, having loads of sex, chloroquine and hydroxyl chloroquine. Recently, there was a claim that people who have hair in their nostrils are unlikely to contract the disease.

As mentioned earlier, these videos are tied to major events or happenings. Therefore, during the partial lockdown of parts of the country, several videos circulated of military brutalities, some of which later proved to be false.

For example, one viral video which found its way into mainstream media and was part of the evening news bulletin on a major TV station, claimed law enforcement agencies in Zimbabwe used force to enforce lockdown directives. The government of Ghana was, therefore, urged to imitate Zimbabwe. The video in question, however, had nothing to do with the pandemic but was of an incident which happened in 2019. Zimbabwe had not recorded a COVID-19 case at the time.

Photos of food distribution exercises during the lockdown period were also taken out of context. We found them to be unrelated to the COVID-19 pandemic. Photos of a weeping Brazilian president were said to be of Italian president who had lost all hopes due to the havoc COVD-19 was wreaking on his country. Stories of Italians throwing away money because it had become useless to them all featured on social media. Again, these were old photos rehashed but with different narratives.

In the face of the economic hardships resulting from the pandemic, scammers also took advantage of the situation to dupe (or try to dupe) unsuspecting persons.

Melcom was said to be giving out free vouchers; the WHO and phone manufacturing companies including Vivo to be running promos. Footballer Christiano Ronaldo was also purported to be giving out money to aid households affected by the pandemic and the Ghana Armed Forces undertaking ‘protocol’ recruitments.

Some of these claims had unsafe links which redirected people to fake websites, while others circulated dubious instructions for getting involved in said promos.

These were all false as parties said to be involved denied being that charitable.

Conspiracy theories on the origin of the virus and even its existence were and are still viral.

One photo claimed the WHO said it was unsure the virus exists on the African continent.

Others claimed Bill Gates is behind the outbreak, that it was planned years ago as part of his goal to get the whole world vaccinated. Some also claimed President Barack Obama had warned Africans against being vaccinated as it was an attempt by ‘white people to kill Africans with their toxic vaccines’.

Another worrying trend we have observed was the exploitation of the current situation by political actors to either make their candidates look good or to discredit political opponents. We have seen messages attributed to major political figures including the President and his appointees, the former president and flagbearer of the opposition National Democratic Congress (NDC) and members of his party. In all cases when we verified, the claims were false.

For instance, in March, a Facebook post which was flagged to Dubawa as part of its Third-Party Partnership with Facebook claimed that former President John Mahama said he would not contribute his money, which is earmarked for his campaign, to the COVID-19 fight. This claim we found out to be false.

Another post flagged to us by Facebook in April said the President, Nana Akufo-Addo, said he would resign from the presidency and withdraw from the December 7 elections if Ghana’s COVID-19 cases exceeded 500. This was debunked by the Director of Communications at the Presidency, Eugene Arhin, when contacted.

How can you verify information on Social Media?

With the avalanche of information members of the public are being bombarded with day in and day out, how can we differentiate between true and false information? How can we do this, considering that despite several fact-checks, false information creators seem to be gaining the upper hand owing to the availability of sophisticated technology to aid them?

The first thing to do is NOT to immediately share or forward messages without verification, especially if they arouse in you strong emotions like fear and anger. It is sometimes a ploy by creators of false information to use you to gain traction. So VERIFY first, before forwarding to others.

Here are some tips to guide you:

In conclusion, fact-checking or verification is very crucial in these times. It also yields results. From our partnership with Facebook, we know that about 95 percent of people who saw warning labels on posts which had been rated false by fact-checkers did not view the original content and therefore were not exposed to false information contained in them. Thus, when people are aware that the information they are about to consume is false, they avoid them.

Therefore, it is important to continue fact-checking to debunk false information and ensure members of the public, social media users especially, have access to factual and verified information.

We continue to count on the support of relevant bodies in this endeavour.

Caroline Anipah is the Programme Officer of DUBAWA, Ghana. She holds an MPhil in Communication Studies and an undergraduate degree in English and Political Science from the University of Ghana. She is a trained journalist and has engaged in various research activities with notable institutions including Ghana Statistical Service, German Development Institute (GIZ) and the USAID Evaluate for Health over the years. She has also worked with the Media Foundation for West Africa (MFWA) on a regional (West Africa-wide) comprehensive research on the state of the media. She brings to the project and team, her experience in both media and research.